The hollow hour.
Blank, empty.
The very pit of all other hours.

Four in the morning.

It’s a Saturday night and I can’t sleep.

For months I have been struggling to find a topic for a new Crooked Porch entry. I have photographed, explored, traveled, and played. Yet each time I sat at the computer to write, my mind emptied of words. With family life busy during the spring and early summer, I struggled to find both time and enthusiasm for writing and photography. Days turned into weeks, which evolved into months. I needed a story to snap me out of my malaise.

A few weeks back I was driving through Bay View on my way to the movie theater. Radiolab was playing on NPR. The show’s topic was ‘Time’. The first conversation was entertaining, focusing on how time moves faster the older you are. The hosts bantered playfully about summers that seemingly lasted for years in their youth. Once I exited Bay View, and the bay came into view, I lost interest in the show. My mind wandered, and my neglect of the Crooked Porch weighed on me. I needed a new topic. Something fun. Something I would love to both photograph and write.

That was when Radiolab shifted to a second conversation. The guest was poet David Rives, curator of the online Museum of Four in the Morning.  “Some people consider 3 a.m. to be the latest someone could stay up to,” he said to introduce the topic, “while to others 5 a.m. in the morning being the earliest someone would have to get up at during the day. So 4 a.m. being stuck in the middle; what really happens at that time? Did you ever notice that four in the morning has become some sort of meme or shorthand? It means something like you are awake at the worst possible hour. A time for inconveniences, mishaps, yearnings…”

For twenty minutes, the hosts and guest discussed four in the morning. They called it the Still Hour, that time when night owls have fallen asleep and early risers have yet to awaken. “Police, nurses, and stock boys at Wal-Mart are the only ones up,” one of the hosts said.

It was a Saturday night in June, and I couldn’t sleep. I tossed in bed, too hot for a blanket and too cold for only a sheet. I looked at the clock. 2:30am. I got up, turned on the TV. Nothing to watch save a crappy Adam Sandler movie or infomercials. Still I flipped. 3:30am. I was wide awake. I grabbed my phone and scrolled through my notes. ‘Four in the Morning – Petoskey’. I splashed some water on my face and got dressed.

The drive to Petoskey was eerily silent. I passed one vehicle on M119, an ambulance with its lights off.

When I reached Petoskey, I parked near the Perry Hotel. There were a few drunks stumbling up the porch and into the hotel, talking loudly in what they thought were hushed tones. A Petoskey police car passed, followed a few moments later by a sheriff. I dragged my tripod and camera from one street corner to another. I found myself alone. The city was still. Eerily still.

I shot in the middle of the road. Petoskey was my own personal playground. I was in town for over an hour, and only once did I have to move out of the street due to an oncoming car. I saw no other pedestrians. The only sound was the hum of the street lights and the whooshing of the sprinklers. Even the birds, it seemed, were fast asleep.

I made my way through town, and down to the harbor. Music played in the distance. It was coming from a yacht. Dean Martin and Frank Sinatra. Romantic. Mellow.

The water was calm. The stars blanketed by a thin layer of cloud.

It’s a different place, Petoskey at four in the morning. Still. Quiet. Hollow. 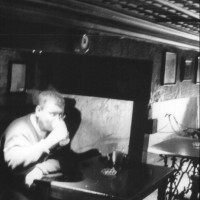